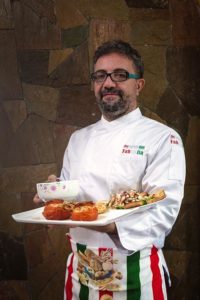 Born and raised in Rome, Fabrizio grew up in a multi-cultural and multi-lingual environment. The son of influential educators in Rome, he and his siblings learned the importance of education from their parents and inherited their tenacity to learn and excel. As a curious child growing up in “The Eternal City”, Fabrizio enjoyed watching tourists from all corners of the world, coming together to visit the Vatican City and admire its rich history and artistic splendour. A child, whose maternal grandparents hailed from a former aristocratic family in Southern Italy, he was also exposed to the richness of Italian history and culture. Combined with his heritage and pride with what Rome (and the rest of Italy), had to offer to the world, he started to have a keen interest in the arts and history of Rome. At the same time he learnt cooking by the best Italian master chef, his grandmother Maria Stella, and worked in different Italian restaurants as well.

Despite his affluent upbringing, Fabrizio preferred to take on odd jobs to pay for his college and university fees, studying in the prestigious L.U.I.S.S. University, and graduating with a Master degree in Business Economics. He believed that by doing so, he would be exposed to life experiences and greater challenges that the privileged would not have the opportunity to experience. A practicing Catholic, Fabrizio gave up his consultant post at an auditor firm and joined Caritas to volunteer his time and services to those in need. He professionally worked as a manager with Caritas and had served with them faithfully across Europe in war torn countries like the former Yugoslavia, Albania and parts of Eastern Europe during various national crises, carrying out projects in the framework of Italian Cooperation, European Union and United Nations relief programs.

After 16 over years of working across Europe in various capacities, Fabrizio made Singapore his second home in 2011. Living in the tiny red dot for the last few years has not quenched his enthusiasm in bringing Italy to the world. For his love to share with his new Community, he was and still is the first Italian educational and cultural chef and trainer who got the qualification for teaching in the Constituencies by People Association. He has cooked his way into the hearts of many Singaporeans through his humorous, educational, insightful and thoughtful Italian cuisine classes at the local Community Centres and Public & Private Institutions and Schools. He credits his love for Roman & Italian cuisine to the influence of his loving grandmother, Maria Stella, who patiently taught him the art of Roman & Italian cuisine when he was growing up. His specialty is in ancient recipes from Ancient Rome and Greece, Roman Cuisine, Traditional Italian Cuisine. A linguist with 9 languages under his belt, not counting Latin and Ancient Greek, Fabrizio prepares his own teaching materials and conducts language classes in the Community Centres, International Schools, the Italian Institute of Culture, as well as private tutoring. An Italian Restaurant Manager by profession now, Fabrizio enjoys collaborating with several restaurants, F&B fairs, companies, and food magazines in Singapore –like BBC GoodFood Asian Edition and Xin Flavours- to create mouth-watering Italian recipes for foodies and non-foodies alike. He also enjoys fellowship with other Italian expatriates in Singapore by facilitating get-together BBQs, Italian national events, and pizza parties.

Naomi is currently a full-time professional dancer at one of Singapore’s most established contemporary dance companies, The Arts Fission Company. She has been performing and creating works with this company for two years now, working closely with the Artistic Director and Cultural Medallion recipient Angela Liong. She has also worked with other acclaimed international dance artists such as Wallie Wolgruber (USA), Pichet Klunchun (Thailand), Peter Chin (Canada) and Lim Fei Shen (Singapore).

When she isn’t in the studio, Naomi enjoys sailing, surfing, travelling to new places and trying new things. Naomi is versed in theatre and theatrical design elements such as acting, physical theatre, costume design, lighting design, sound design, and sound editing. Also has experience in Fashion design and is a freelance professional makeup artist. 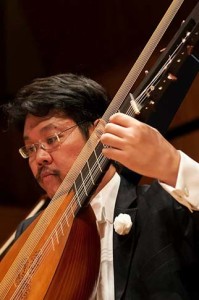 Edward was born in Singapore and decided early on that he wanted to be a professional classicist, and after managing to evade studying the usual Law/Engineering/Medicine/Business/Accounting subjects, persuaded his parents to let him read Classics at King’s College London. He is, for the moment, one of only two natively-born Singaporeans who are qualified to teach Greek & Latin language and literature.

He acquired a renaissance lute in 1994 and has been trying to tune it ever since. His chequered lute-playing career includes a few lessons with Scott Pauley, Jacob Heringman, Jan Čižmař, Juan Carlos de Mulder, and Pascale Boquet. He also functioned as an emergency lute-for-hire during his university days in London, which also saw him being drafted into several last-minute gigs (including a few at Shakespeare’s Globe).
In concert, he has played mostly accompaniment and basso continuo for various combinations of singers and voices. In his dotage, he has acquired baroque and renaissance guitars and is now strumming away on them, hoping to be the Paco de Lucía of the Early Music world.

During his years in Europe, he became a trained chanter for the Gregorian, Byzantine, and Synodal Russian Orthodox traditions. He currently sings bass in Cappella Martialis, Singapore’s only specialist Early Music singing group.
While not in musical or literary activities, Edward watches Science Fiction films, does voice-overs, and fences sabre. 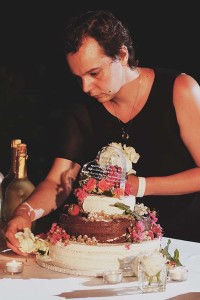 Hallo, I collaborate with Fabrizio snd with FAB Italia with his travel activities in collaboration with Ergo Travel in Singapore. I’m a naturally creative destination wedding planner. I live and work in Tuscany, in particular in Florence. I love sharing the knowledge of the territory and our culture with all the people that I met. I believe that the Italian life style, the food and the culture are among the most important reasons why so many foreign couples choose Italy for their destination wedding. I graduated both in the United States and Italy, then when a I came back to Italy, I took an university degree in International Science followed by a post degree in Marketing and Communication. I have a particular attention to the other cultures and I never stop learning from others and from myself. Thanks to my previous jobs, I lived from north to south Italy and this gives to me an edge in understanding and appreciating different environments, distinctive points-of-view and varied styles. I have worked in the events industry for over eight years, organizing parties, wedding ceremonies and celebrations, advertising campaigns and shows in a variety of locations. I bring personal enthusiasm and absolute passion to every event I plan. Recently, I worked almost three years as a wedding planner in Italy for a London based agency. Now I have established myself as a freelance bespoke wedding planner specialized in destination weddings in Italy, in particular in Tuscany! With clients from across the globe, I have worked with a diverse range of venues, budget and requirements. I personally oversee events with a practical sense that doesn’t ever limit my creativity. 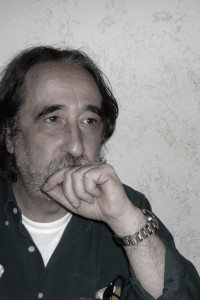 A lover of fine arts and a comic book enthusiast, Furio Ortenzi graduated from the prestigious Fine Arts School in Rome, Italy. A bona fide comic artist, Furio had the opportunity to collaborate with various notable designers, magazines and book publishers to showcase his work.
In 1982, he had worked with Piergiorgio Maoloni on the 20th edition of Diario Vitt, a popular educational publication for young Italian children. Furio also contributed immensely to other magazine publications such as “Rinascita”, “Radio, Cine e TV”, “Paese e Fantasia” and many others. Such collaborations led to opportunities for Furio to expand his skills and talents in other fields.

After graduating from Ecap – Cgil in Rome as a graphic designer, Furio was hired as an illustrator, creative designer and junior art director for an advertising company in Italy. As a professional graphic designer for the last 30 and more years, he had the opportunity to create print ads for advertising companies such as AS Advertising Service, AB Group, Pradma, Consulting Bureau, Publiaci, Fluidea, The Looking Glass Factory, and Promomax and others.
Furio also taught Basic Design at the Istituto Europeo di Design (I.E.D. – European Insitute of Design) for awhile in 2000.

1997: Started work as a freelance graphic designer with main focus on Arts, Culture, Education and Sports.

1998: Designed and produced a campaign for Roma Municipality in the promotion of Roman Summer Holiday, a summer long event of exhibitions, open air cinemas, music and dances.

2000: Began exploring and experimenting with various styles of graphic designs in advertising, focussing mainly on designs, styles and techniques most suitable for museums and archaeological sites across Italy.

2008 – Today: Back to Italy, started work through the internet for many local and international companies.

The Logo is the deep essence of a company and has been personally developed by the experienced Roman Graphic Designer Furio Ortenzi. It looks quite simple and understandable to everybody, with clear, thick and clean lines, in order to be available and easy visible for all kind of needs and graphics, but although its simplicity it is full of meanings and symbols and a metaphor of Italian culture and Italian cuisine itself. It represents the classicity of Italian Culture through the internationally world famous Bodoni Italian Font, the colour “Blue Savoia” (a particular tone of blue which is the one of Italy according to the national symbols), the aural proportions in the writing, the circle which represents the perfection that a man can achieve through knowledge and culture, the toque of the chef for the cultural activities, which stands on the books, therefore meaning that Italian Cuisine is for Italians tradition and culture values itself. The books of course mean the educational level, the enrichment, the progress, with their shape like an arrow moving forward, with the three colours of the Italian flag: green, white, and red.
The movement dynamics of the logo represent as well education, which needs to stand on firm classical basis, but needs to move further to a continuous improvement as well.
Here are some other logo drafts prepared before proposing the logos to the customer’s analysis and commission which chose the one in use. 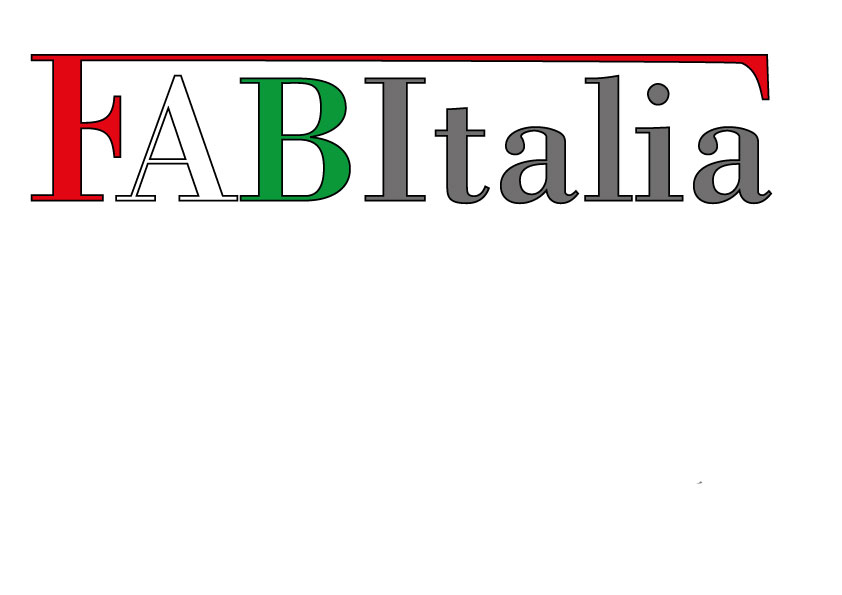 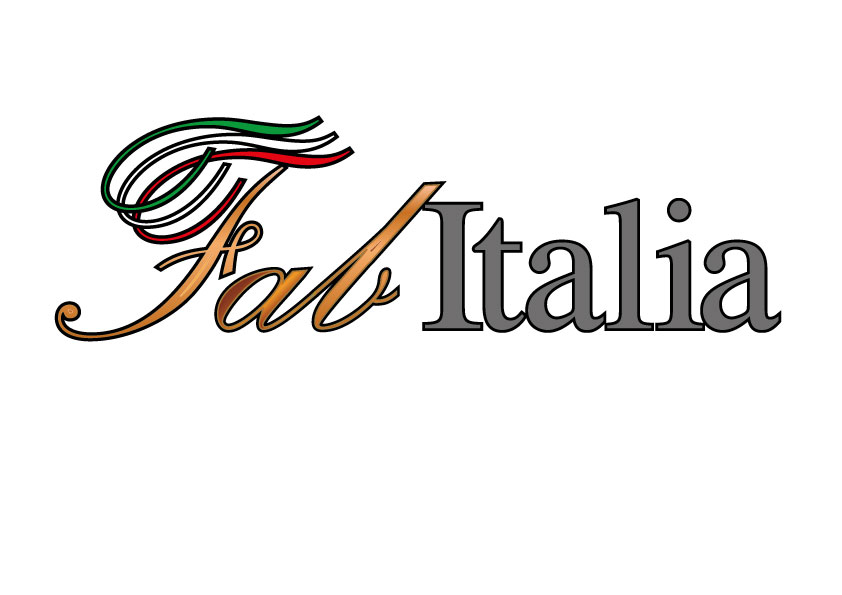 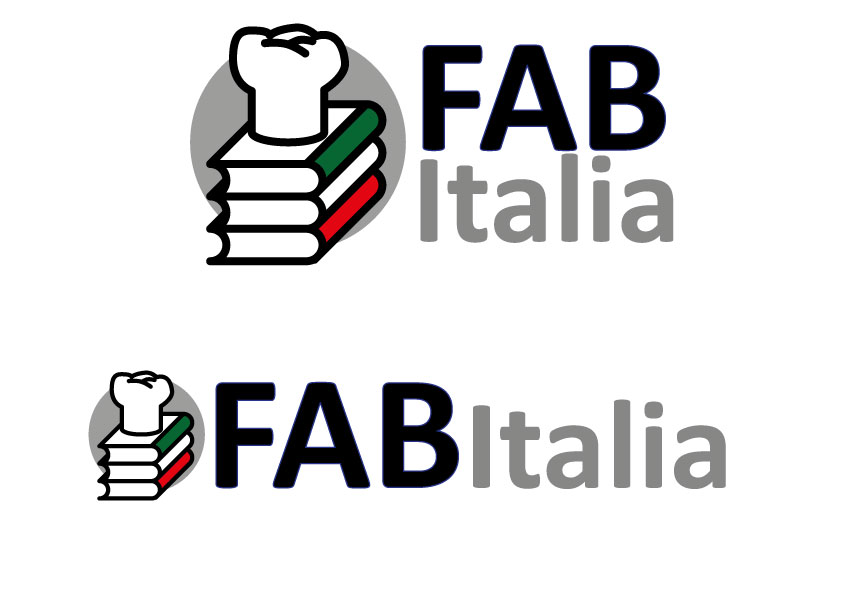 Our company continuously seeks to provide avenues in which Italy can be discovered and appreciated through her language, her cuisines, her arts & culture as well as her natural beauty.

To be a company that is passionate & committed to the promotion of Italy and all things Italian to the rest of the world.

An Italian dream: our realized dream

FabItalia Lifestyle Private Ltd is the realized dream of Fabrizio Righi, an Italian from Rome, and Permanent Resident in Singapore. An Italian with a high educational level, Master Degree in Economics and Business Administration, Humanities, and lots of work experience as former Manager for International Caritas Network, Restaurant Chef and Manager, Cuisine Instructor, Event Manager, Language Trainer, Translator, and Linguist who spend 20 years of his life abroad. The company aims to promote and spread the knowledge of Italy, the Bel Paese (Beautiful Country) and its excellence to the local community in collaboration with local and international institutions and communities. The company manages activities in culture, cuisine, language, cooking classes, language classes, seminars, events